Understanding the role of bell mouths on source capture 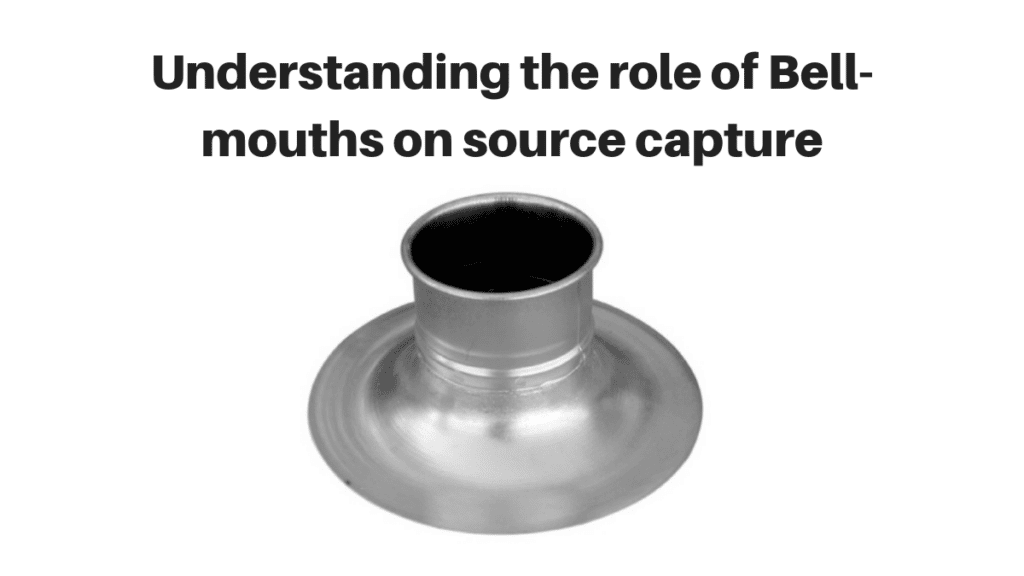 Often in life, we try to go the cheap route, and sometimes it ends up costing us.  This is true when it comes to ductwork design on air filtration systems.   As we know the employee market in the manufacturing industry is very tight, everyone is trying to retain and recruit employees.  One of the factors that helps in this is air quality.

Some small changes to your filtration system can yield great returns – especially in system performance and cost of operation.

One common mistake is in the hoods or lack thereof at the source of capture.

The most common and least expensive of all hood configurations is the “raw edge hood.” It is just an open duct which stops near the source of the smoke. Hood design just doesn’t get much simpler than this approach.

Raw edge hoods, while very simple to produce, provide the poorest performance in collecting contaminants at the point of generation. This hood configuration pulls air not only from in front of the duct opening but, unfortunately, also from behind the hood opening, which makes it inefficient. This configuration also creates turbulence that, depending on airspeed, can effectively make an 8” duct equivalent to a 6” duct because of the air being compressed as it comes around the edge of the duct. (see drawing below) It also can contribute to increased energy losses and a potentially larger fan. This hood configuration option is less than optimal from a total cost of operation perspective.

There are many hood options, but one that is simple and very cost effective is the bell-mouth.  It is so named because its tapered shape resembles that of a bell.

The bell-mouth shape allows the maximum amount of air to be drawn into the duct with minimum loss. It has a flange style piece that prevents pulling air from behind the duct opening and the low turbulence of the spun bowl entry profile.  With these attributes, it not only helps bring more volume of air but also helps with the direction that the air is pulled from.

In summary, if your factory is hazy, take a look around.  Can you see where the smoke or mist is not being captured?  Are there ducts that just stop over the parts bin that can have a bell-mouth or hood added?  Are there parts of the machine the can be enclosed?  There may be some small changes that can save you large expense and help your employees stay healthy.